After pressure of favouring Kuria against Luo, Ruto won’t launch this road on Saturday 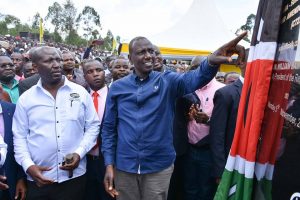 DP William Ruto when he commissioned a road in use while in Luo area, but will launch a new one in Kuria on Saturday

On Monday, Ruto visited Luo area of the county after heavy criticism from Luo leaders earlier which never subsided even after the tour.

On Saturday, Ruto will skip the launch of the Isibania-Kehancha-Kegonga-Ntimaru road in Kuria, after failing to launch the completion of Masara-Muhuru Bay road on C13 road.

Ruto had commissioned the C13 road whose first phase was to cover Muhuru Bay-Masara-Migori, but was pushed over to continue to Kehancha town, up to Tarang’anya in Kuria region.

Among Ruto’s main critics is Nyatike MP Tom Odege who said his coming was a ‘big waste of time’ for his constituents as even the last segment of the road is not budgeted for completion.

“I am a member of Roads Parliamentary Committee and I can authoritatively report that the Muhuru – Masara road which he launched in my constituency is non non-existent,” said Odege said.

In an all out outburst, he added: “Ruto is very cunning. He came to test political waters but disguised it a development tour.”

On Monday, before he begun addressing the crowd Ruto apologised for favouring Kuria in his development tour and ignoring Luos, which might have forced him to avoid launching the Isibania-Kehancha-Kegonga-Ntimaru who work begun last week to avoid more political backlash.

While he was in Migori to launch development projects not attributed to him, in Kuria East he will launch over Sh150million Technical Training Institute(TTI) at Kendege and preside over a fundraiser in aid of over 20 churches in the region. 7

But Kuria East MP Marwa Kitayama who will host Ruto said “the DP requested to postpone the launching of the road to next year. This is owing to time constraints as he will be expected somewhere else.”

The road links Migori County to Narok county,  had excited locals, most of who are hopeful that the road will open up the remote region to investors.