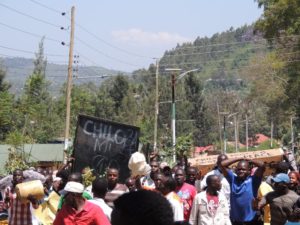 The coffin for Ezra Chiloba

The two legislators and several MCAs led the public to defy anti-riot police officers who fired teargas and shot in the air.

Trouble started when the legislators tried to gain access at Migori IEBC offices where they defied five shots fired to scare them.

“We fought for this country freedom as the Luo community and we want to tell police the same stance will be used until Chiloba is gone,” Masara said.

The team carried a coffin with ‘remains’ of IEBC CEO Ezra Chiloba and IEBC officers they accused of bungling the August 8 presidential election.

Nyamita said they were not afraid of gunshots and teargas until the will of the people is respected.

“We will never have any elections in Migori County if Chiloba is still at the IEBC. We will stay put until we are in State House,” Nyamita said.

Kanyasa MCA Jackiepol Ongoro said the current IEBC subverted the will of the people and are hell bend in repeating the same.

Migori town became a no go zone as the leaders and the public led anti-riot police in running battles.