This is why Migori commissioners, chiefs boycotted Mashujaa celebrations 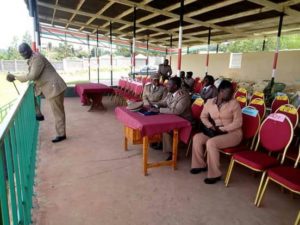 Where are the people? Chiefs before they left the stadium

The fear by Migori county security team for a backlash for shooting 14 anti-IEBC demonstrators on October 13 was the main reason for skipping last Friday Mashujaa Day celebrations.

Chiefs and their assistants who came at the function pulled down a flag raised earlier by scouts hurriedly and left the Migori county stadium after State House called at about 9pm to call off the function.

“We were afraid of the public backlash after 14 people in anti-IEBC demonstrations were shot on October 13 by anti-riot police. The situation got worse after NASA leader Raila Odinga called for a boycott in honor of victims,” a chief told Migori News.

The administrators said the previous day their office planned for the function which included hiring the venue, plastic chairs, tents and food for about 1,000 guests they expected.

“I brought chairs and tents at the function, but was shocked when commissioners didn’t turn up and the chiefs left without a word,” Ben Onyango a trader said.

Jack Odhiambo, an entertainer whose group was hired played and danced to patriotic songs to few children who turned up.

On the deadly day 14 people including a 73 years old Florence Gede and two students were shot by police in Migori town.

They still have two bullets each to be removed from a referral hospital.