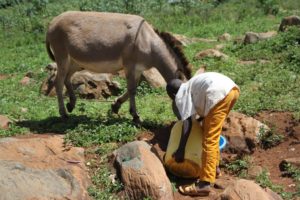 The suspended pupil at home

A class two  pupil  from Dago primary school  in Migori has been staying at home for the past two weeks after being suspended for failing to pay money for teachers’ porridge.

The student, 8, has resorted to feeding animals at their home after failing to do this term’s examinations over the standoff.

Speaking to Migori News, the pupil said he was flashed out of class by his class teacher over the standoff before he was send home.

The pupil’s father Erick Odhiambo claimed his son was suspended and the reasons not communicated to him clearly.

“He was always send home and a week before examinations he was suspended despite having paid the examination fee,” he said.

He said he was affected by about Sh490 which was to be used to buy cassava meal for teachers for making porridge.

But the school’s head teacher Joshua Otieno Opee and Kennedy Okoth, the PTA chairman, refuted the claims as malicious.

The two said the issue was blown out of proportion as the school has been improving since they first sat for their national examinations in 2016 with a mean score of 320.74 last year.

They said the decision to have teachers get a meal in school was key in extra-classes and was passed through parents and not teachers’.

Rongo Knut Executive Secretary Thomas Ochiel said the claims raised by the parent were malicious as the decision was passed jointly.

“We believe the parents had personal problem with the school and went to the press with malice,” Ochiel said.