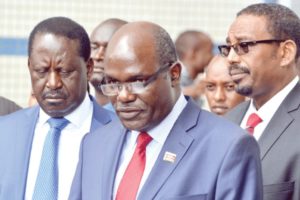 1. Explain why Chiloba contradicted the position adopted by the commission on a memo referenced IEBC/CEO/1/1/09/2017

2. Explain what happened to the printed forms that were meant to have approved security features and names of candidates printed in accordance with ballot proofs and as verified by teams commission sent to Dubai

3. Respond whether printing and scanning machines supplied by Messer MFI were fit for the purpose as contracted; where they were availed and why they failed to work.

4. Explain why the Sh 848 million satellite phones bought by the commission were not used to relay data from polling stations as it was supposed to be.

5. Explain why, without his consent, his name used to create an account that was responsible for 9,934 transactions.

6. Explain what went wrong with the Kenya Integrated Elections Management System (KIEMS) kits results transmission where over 10,366 out of 40,883 polling stations sent text results without Forms 34A.

7. Explain why 595 Polling stations failed/refused to send any results for the presidential election.

8. Explain why the commission decided to use a porous file server system for forms 34b submission instead of using a secure system which made it easy for individuals to manage accounts on each other’s behalf, clearly a security risk.

9. Explain why the commission used the subject server for day to day operations before elections and why ICT staff used passwords different from IEBC passwords.

10. Explain why some KIEMS kits were assigned Airtel and Telkom service providers in areas where only Safaricom had the required coverage.

11. Respond on why commission experienced non-validation of voters after KIEMS identification.

12. Explain why 682 polling stations had an equal number of rejected votes vis-à-vis the number of registered voters.