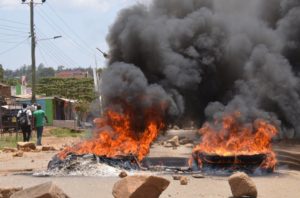 A bonfire lit on Friday in Migori town

October 27 will forever remain as black Friday, night of terror for Migori residents are police meted brutality never seen before.

The epicenter was at Migori bridge, which as you will see in the video was blocked, as police tried to clear it.

In the video, a contingent of police officers, both in uniform and plain clothes are seen firing at demonstrators at the bridge.

After the melee, one person was shot dead Thomas Owino, 39, from Oruba estate with scores other injured.

Among those injured is Collins Ochieng, 10, who had his intestines raptured after being shot by police and another man had his liver raptured. Both were from Oruba estates.