Police are caning us at night over insecurity- Rongo boda boda 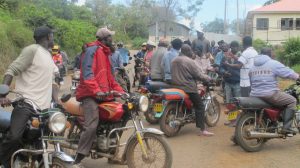 Boda boda operates in Rongo have threatened to demonstrate if the police officers will continue harassing them at night.

The agitated group has complained of police brutality despite being ordered by the Migori county Zachary Okoth Obado to stop and find a solution to solve the matter.

Speaking to press the Rongo Boda boda circle Enock Asiyo have expressed fear over the cruel beating from the police especially at night saying that they have face the wrath of the officers putting their life in danger and denying them the opportunity to operate freely.

This comes barely two months after Rongo was put on a sport light over the rising insecurity in the area where a number of murder cases and robbery with violence being reported.

“We accept that there has been insecurity in the area but this is not a guarantee for the officers to harass us especially at night. We are being caned,” Asiyo said.

He said that they have followed strictly the regulations that were introduced by the officers to have all riders avoid night travels.

But area police boss Jonathan Kisaka said the allegations are far fetched insisting officers on patrol have been more keen on motorbike riders operating at night as they are used to transport criminals.

Kisaka said residents had complained that most riders are used to ferry criminals at night which has increased their patrol.