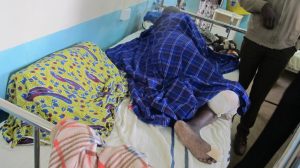 The wanting situation of medical facilities in Migori County has gone deeper as most of the hospitals lack some of the basic requirements to render proper services required by many.

This is after a patient passed on in Rongo level four hospital and circumstance made the corpse to stay in the hospital bed for several hours before being taken to the mortuary.

This caused panic to the patients in the same hospital where they had been admitted for treatment.

Our sources revealed that the said patient died on the midnight of Thursday but the body was only removed on Friday at four in the evening.

One of the patient care taker expressed fear and discomfort for having a dead body next to his patient for several hours.

“We were never at ease in this room since this person died and its body was not collected promptly causing trauma,” said Peter Owino who was nursing his cousin on the adjacent bed.

Speaking to Rongo medical officer of health Ruwa Mwatelah at his office he attributed this to lack of government mortuary nearby and the logistics involved.

Mwatela said that there is only one morgue in the entire county, at Migori referral hospital which is several kilometers away and notification to the diseased person has been a hindrance.

“We always release bodies from hospital beds to any mortuary when there are people concerned. We feel for the affected patients but the Ministry is yet to build mortuaries,” Mwatela said.

He however said that Migori county is facing several challenges like only one mortuary in Migori and only two operational ambulances.

He said they often beg for ambulances to transfer referral cases and bodies from nearby institutions like Rongo University.

Migori county health department has been in the receiving end with high drug theft cases while county Executive for health Joseph Nyamita could not be reached for comment.