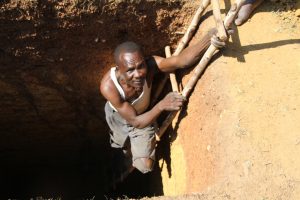 Residents around Nyatuoro Primary School in Nyatike sub-County have resorted to build toilets to prevent the institution from being closed over lack of the crucial amenities.

Already over ten villagers have volunteered to dig four pit latrines after Public Health officials closed the school a week ago.

The school has a population of 550 pupils with 20 students who are expected to sit for their Kenya Certificate for Primary Education (KCPE) this year.

On July 5, the county public health department wrote to the institution to close down, but parents have continued sending their children to school.

Sadly the school is from North Kadem ward where the current MP Tom Odege, county speaker Boaz Okoth and other key leaders hails from.

“The school had four pit latrines with eight doors where two of them collapse following the heavy rains that stormed the region in the past session,” Said Ogola.

Ogola said that the two remaining latrines are the one that are being sheared with the pupils and the teacher.

“We were summoned to close the school on Wednesday last week but the community asks the health offices to give them chance to build some temporary pits latrines in the compound to help the situation.

“We have come up with plan and the budget to construct the toilets that will cost us almost Kshs 1.9 million,” he added.

Nyatike Sub- county Education Director Elija Kongere confirmed the situation and said the community is at risk of cholera outbreak.

Nyatike MP Tom Odege said that he us instructed the CDF office to do the survey and arrest the situation. He promised to build enough toilets for entire school.