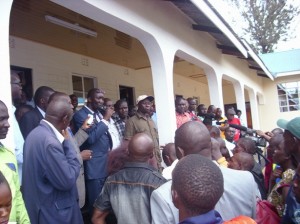 By Fred Okoth,
Good news to the Migori County Assembly members after the new county assembly, refurbished to the tune of 15 million shillings was officially opened last week.
The facility, which also has speakers’ office, a boardroom, Hansard editor’s office, sergeant-at-arm and other officials offices was opened after the repair work which took two months to complete.
Speaking during the opening ceremony, Migori County speaker Gordon Ogolla said the new assembly will now enable the MCA’s to move ahead with their main job which is legislating for the county.
“County residents can now expect us to move ahead fast and offer the necessary services,” he said adding that the facility will go a long way in offering information to members of the public as it also has a place for public to sit and follow debates.
According to Ogolla, when the County assembly was constituted, they lacked some of the basic facilities and the room could not even hold all the 60 Ward Representatives.
He further announced that more will still be done at the assembly including a perimeter wall around it, a concrete driveway as well as a canteen within the assembly’s premises.
“We want to make it one of the best assemblies in the country,” he said adding that he was sure that the MCA’s will take advantage of the good facility available and enact legislations that will move the county forward.
He also warned Members of the County Executives that the county assembly will play its oversight role to ensure that the County Executives do their work well and serve members of the county.
“We have a role of ensuring that you do your work well,” he said adding that now that most of the foundation had been laid, it was important that everybody did their work well.
Speaking at the same forum, Governor Okoth Obado said the government started with inadequate infrastructure and facilities but are using available resources to ensure efficiency in construction.
“We have little resources but we have to try and use them well to make the best of them,” he said adding that the county will only develop if the resources were used well and wastefulness avoided.According to the Governor, the County government inherited devolution with little and poor infrastructure and were still in the process of improving them so that they can be of County Standards.
He however said the assembly would only be a temporary one as the county had plans of building a much bigger and better ultra-modern assembly and county headquarters in the future.
At the same time, Obado called on the county members to be patient with the county leadership and give them time to accomplish the plans they have initiated saying just like any new body, the county government needed time to accomplish its goal.
“Let the county residents understand that we are still in phase of planning and laying down the foundation,” he said adding that county residents should be able to start noticing improvements in the county.
Speaking at the same function, Migori Women representative Dennitah Ghati called on all elected leaders from the county to work together in order to improve the living conditions of the county residents.
“As elected leaders, we have to ensure that we join hands in ensuring that the lives of our people is made better,” she said adding that it would be wrong if leaders ignored their electorates.
On his part, Senator Wilfred Machage thanked the county leadership of using the resources well and said as the county’s senator, he will continue fighting for more funds to be brought back to the counties.
“I am glad the money has been used well and all can see from the result,” he said adding that it was important that any resources which came to the county was well used for the benefit of the entire county and did not just end up in a few people’s pockets.
Soon after the opening of the new assembly, MCA’s had their first sitting after having spent the last three months holding their meetings at Maranatha Assemblies Hall during the renovation of the assembly.
However, all members of parliament from the county skipped the function.