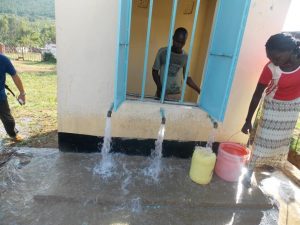 A woman draws water from a similar Sh986million water and sanitation project launched in Migori town on July 3, 2014. What happened to the project?

Over 3,600 households in Migori town have lived without water for over three weeks after county government failed to pay electricity bill to Kenya Power amounting to millions.

The most affected facility is Migori County Referral Hospital with traders and residents also resorting to buying untreated water from springs within town.

Ironically in July 2014, Africa Development Bank launched a Sh986million water and sanitation project within town with a capacity to produce 2 million liters per day which has been running below capacity.

Kephar Reuben, a taxi driver from Posta area within town said they fear cholera and other water related disease outbreak.

“Three weeks without water within this populated town is a health hazard in waiting to happen. We have a governor and he should tell us how he wants us to live without water,” he said.

“We are still remaining with Sh1.4million dues which we will finish amicably by Kenya Power to have connection back,” Oluoch said.

She blamed the problem on illegal connection of water and lack of metering of water points by county government.
She said her ministry has already procured 1,000 meters to streamline billing process.

Oluoch also in last financial year Migori has led a 20Km extension of water points in Oruba estate within town which will increase consumers.