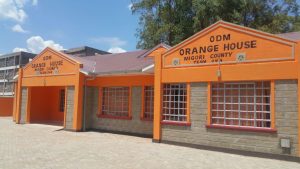 Mbadi said county leaders led by chairman Philip Makabong’o who have been against the office should sit down with Obado and find out a way of working together.

He was speaking at Ombasa Secondary School in Awendo constituency where he was hosted by area aspirant Walter Sirawa for a funds drive.

“If there is any donation by our member the office should move ahead and take it without creating further division,” Mbadi said.

Mbadi also warned that officials should avoid attacking the governor claiming that he recently defected from PDP.

“We can’t segregate members on how new they are in the party, everybody is a member,” Mbadi said.

His statement has brought to the end attack on office led by Obado’s rivals for fear that the office will give him undue advantage in polls.

“We will receive the donation, but it doesn’t mean I am favouring anybody. Obado will still have to face it off with Ochillo Ayacko, Anne Omodho Anyanga, Mark Nyamita and others equally,” he said.

Obado said Migori county will host a second Orange House in Kenya, insisting Raila made him the county ODM patron during his defection.