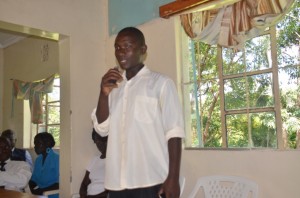 Erick Ochieng, an IDP in Migori with two lodged bullets in his head and pelvic. He wants seeks/VERAH ROBI

Migori county Internally Displaced Persons during the 2007/08 post-election violence want compensation and recognition from both national and county governments.

Through Nyanza region IDPS Network Support Society (INNS) 3,182 integrated IDPs said that they have been ignored while their Rift Valley and Central regions counterparts have benefitted.

Speaking to the press in Migori town the IDPS INNS Migori county chairman Fredrick Juma Mboya want the county leadership and the president to come out and help them iron out their issues as they are always left out when the Government compensates other IDPS in other regions across the country.

‘’The IDPS seated here were chased away from various places in the country like Naivasha, Eldoret and Nyahururu and came to settle with their relatives but the Government has not given them any compensation as other IDPS from other camps have been given land and sh 400000 each.’’said the chairman.

The chairman added that the Ministry of Special programmes in the previous regime had all the names of the IDPS from Migori county and they have not been given anything from the Government despite others being compensated sh 400000 and houses built for them in parts of Rift valley and central Kenya.

He went ahead to say that the Government has ignored the IDPS in the county as others in other places benefit with hefty gains from the same Government.

‘’My fellows who are here suffered during the post-election violence and were brought back to the county but since then they have not had anything from the Government and therefore want to be compensated by the national government’ ’he told the press.

The same sentiments were echoed by one of the IDPS from Awendo sub county Erick Maxwell Ochieng who is living with a bullet lodged in his pelvic bone and the head  and is partially deaf wants the Government to assist him financial to enable him get medication that will help him undergo surgery to remove the two bullets.

‘’I was shot at by the police in Kasarani during the  post-election violence and bullets were lodged onto my pelvic bone and the head and have sort for financial assistance in vain and therefore want the Government to assist him,’’ he said.

The IDPS want the Government to help them get the relief food that is distributed in other places as they live in appellative situation with know stable jobs.