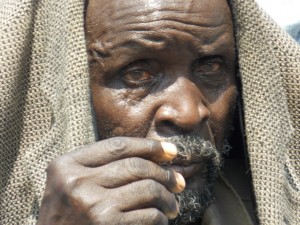 An IDP following proceeding in Awendo function on Saturday

Internally Displaced persons from the 2007/8 post-election violence in Migori County have lauded the acquittal of deputy president William Ruto and Radio Journalist from International Criminal Court.

The IDPs said the acquittal of the two will remove the political tag in the matter and help speed up their compensation.

Speaking in Awendo town, Migori IDPs coordinator Juma Mboya said it was a good sign and that the government will now fully focus on them.

“We have been struggling for nine years to get compensated by government as our counterparts in central and Rift Valley areas have been paid,” Juma Mboya, the Migori county IDPs coordinator said.

The meeting attracted 1,778 IDPs who were integrated back to the society after they were displaced from their previous homes.

Mboya said that they accepted there was no need to jail the two Kenyans over tha attacks, and instead government should speed up compensation of all IDPs in the country to help remove the tag that only “Kalenjins and Kikuyus are being compensated.”

National IDPs chairman Patrick Githinji said they have struck a deal with the government and the money has been allocated already.

“All the IDPs who have not been compensated will get Sh200, 000 each. The deal does not include giving out pieces of land as previously propagated,” Githinji said.

He said IDPs they were going to involve local authorities, the police and officials from the IDPs network to be vet and get genuine ones who will be compensated.

They said those who fake their status will be subjected to a jail term of 10 years or pay Sh5million or both.

Displaced persons from Nyanza region have complained of being locked out of compensation as most of them were integrated back to society instead of staying in some of 64 stadiums across the country.