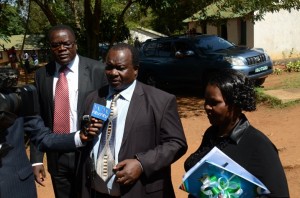 By Fred Okoth
Good news for cancer victims after an American investor announced plans to set up a Sh400 million cancer treatment hospital in Marindi area of Migori County.
The man, Dr Steve James  said  the 400-bed capacity hospital  will be completed and fully operational within the next four  years and is expected to offer cancer treatment for the entire Nyanza region.
Speaking yesterday at the site, Dr. James said that he had already acquired over 60 acres of land  in Migori Town and the plan has been drawn and approved.
“The first phase will cost about Sh200 million”  Dr. James who is the  President of a non – governmental organization – Kenya Relief Foundation said adding that the hospital will also undertake major operations and surgeries.
He said the facility will one of its own class  in the country and it will have the best medical workers from America and other parts of the world located there on a permanent basis.
“ We want people to be able to access such treatment here without having ti travek for long distances,” the Doctor, who has been running an orphanage home, a school and a clinic in Migori Town for ten years  ow said.
The Sh20 million clinic is currently being frequented by medical staff from Harvard and New York hospitals to offer to carry out  different types of surgeries. It attracts clients from Nyanza, Western and Rift Valley regions.
The  medic has also carried out mobile medical outreaches in other parts of the country especially in Rift Valley.
The school section has 320  pupils beside 140 orphans being take care of  by the Foundation.
Dr James said his aim was to establish  a cheap and affordable cancer treatment facility for the poor in the region.
Speaking at the same function, Migori deputy Governor Mwita Mahanga thanked the Doctor for the move while saying that  that many Kenyans were still dying of treatable and preventable diseases due to ignorance and high cost of Medicare in the country.
The investor also bought land and  donated  to the county administration  to put up a police post along the Migori -Tanzania highway in a bid to boost security.
Mr Mahanga said activities of Dr James in the region  would improve the quality of living of the county residents and extended an olive branch to other investors from the West and East to come to Migori county.