Luos should know Kuria won’t vote for Raila in 2017, we may consider county posts though- MCA Hoyo 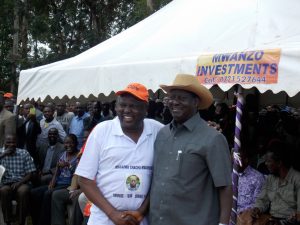 A MCA from Kuria West has warned the Luo community in Migori county not to consider them to vote for Raila Odinga 2017 presidential bid.

Hoyo, elected on a URP ticket at the assembly said Kuria will vote as a bloc for president Uhuru Kenya, Kuria East and Kuria West MP seats or move all MCAs seats in Jubilee.

“My brothers from Luo should know we have accepted to negotiate with them in governor, senate and women representatives position only 100 per cent via ODM. But in these other positions then Jubilee will get them in a bloc,” Hoyo said.

He added: “But for presidents, legislator and ward representative we are going to vote in Jubilee party as a bloc, that is not negotiable.”

Hoyo said the gospel by Raila and ODM for six piece voting has no home in Kuria community.
He was speaking at Mabera Catholic Church in Kuria West when he was hosted by area MP Mathias Robi during a funds drive.

One thought on “Luos should know Kuria won’t vote for Raila in 2017, we may consider county posts though- MCA Hoyo”