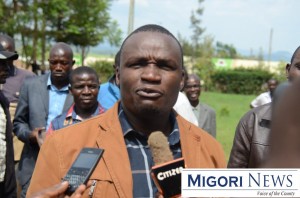 Awendo MP Jared Kopiyo has launched an initiative to reduce Incidences of early marriages and school drop-out in his constituency.

The plan is aimed at increasing enrolment of girls in secondary schools.

The campaign will register many girls in the area.

Speaking during inauguration of Raruowa Secondary School in Ranen, education stakeholders in the sub-county said learners, especially girls from the area will be awarded with special bursaries that will see them continue with schooling.

They said the programme will put in place a means to track all girls from the region and ensure they all finish high school education and proceed even beyond.

The area MP Jared Kopiyo said lack of readily accessible and affordable learning institutions has been a major contributing factor in the low rate of enrolment of girls into secondary schools.

“What is remaining now is to task our government to employ enough teachers who will be posted in the schools so as to ensure all is well with the program,” said Kopiyo.

According to the school patron John Oluoch, who is also the director of privately sponsored students in Rongo University College, the area has been experiencing low transition rate of girls from primary to secondary schools
Oluoch said only six out of ten girls proceeding to secondary schools.

Early marriages that have been common in the area were also blamed on inaccessibility of learning centers that they said are far apart in the area.