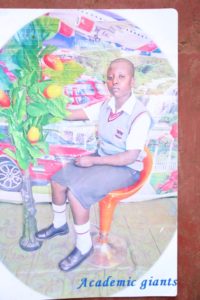 Caren Onyango while a Student at Osingo Secondary School

A Student in Osingo village, Suna East constituency has committed suicide after she received poor results in the just released Kenya Certificate of Secondary Education.

Caren Onyango took away his life after she attained a mean grade of C minus contrary to her expectation.

Migori police comander Joseph Nthenge said Onyango got her results and shared them with her parents before they turned against her for failing.

“They started to quarrel her and castigated her for why she failed for a second attempt without getting university cut off points,” Nthege said.

Nthenge said she felt disappointed by her parents remarks making her take away her life in a borehole in her fathers compound.

But her father Elkanah Okello denied claims that he quarreled her daughter for failing to achieve universit cut of points despite sitting the exam a second time.

Onyango did her first KCSE exam at Osinga Secondary School in 2015 where she got a C minus but went to Moi Nyabohanse where she joined in form three and got the same grade.

Nthenge warned parents against piling pressure on candidates over the results received insisting it is not the end of life.