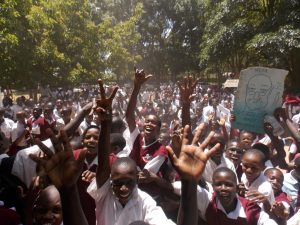 The KCSE examination at Kanga High School, a top performing school delayed for hours after Kiswahili paper one meant for the institution was dispatched to a wrong destination.

It took the quick intervention by the Rongo Sob-County Commissioner Joseph Satia and senior education officials in the area save situation.

It package was found among the batch for Suna East in Migori county forcing county TSC County Director Beatrice Lukalo to bring it to the institution amid tight police security for the paper to proceed.

“It was misplaced among papers meant for other sub counties in Migori County, the headquarters caused the problem,” Satia said.

Kanga being a National School competing those in other areas for such a miscalculation to occur gave indication that some people were out to sabotage its excellence performance over the years.

Mboya Kalawi, an activist in Migori called on Education CS Fred Matiangi and TSC CEO Nancy Macharia should take action to ensure such kind of attempts never re-occur in any part of the Republic.