I call on Ayacko, opponents to work together for Migori- Obado in swearing in 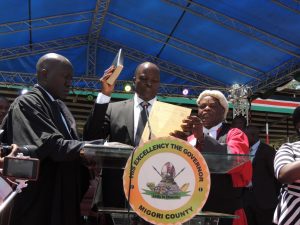 The second term swearing in

Migori County Governor, Zachary Okoth Obado has put in place measures that will see more than 300, 000 people access clean and safe water during his second term in office.

The county boss said already his government has spent Sh48 million in purchasing water drilling rig that is expected to dig more than 200 boreholes in all the 40 wards in the county.

He said that the county government will establish water pans in arid and semi-arid regions in the county and ensure all water springs in the eight sub counties are protected.

“Water provision to all our people is my government’s dream. Issue of water shortage in our towns and urban centres will also be a thing of the past. Our urban centres will have constant water supply. To save our people from economic burden, my government will reduce water connectivity charges; we shall give a rate that will be affordable to our common wananchi,” Obado said in his speech during his swearing-in ceremony at the Migori County stadium.

Obado added the county government would establish fish cooling plant along the Lake Victoria and a sweet potato processing plant in Kuria sub counties to promote competitive and sustainable agricultural practice, improve economy and to improve livelihoods of the people.

“The two plants will enhance value addition and promote the county’s economy. To boost livestock and crop farming, we shall empower our extension officers so that they visit farmers and advise them accordingly,” he further said.

Obado was sworn-in after a landslide victory against his main rival Ochilo Ayacko in the just concluded August elections. In his speech, he however called on his political opponents to join him in building the county.

“I am assuring my opponents that as a Governor, I will not discriminate against anyone; I urge all of you to give me necessary support so that we move ahead. We must see each other as brother and sister, and embrace the virtues of brotherliness, peace and solidarity so that together we realise the fruits of devolution,” the governor added.

Obado said that his government would utilise the county natural resources and allocate enough funds to initiate more projects especially in roads, education, water, agriculture and health that will have huge impacts on the people.

“I will ensure all ongoing projects are completed within the next few months and establish new projects. As the son of this county, I am aware of the needs of our people and we shall utilise the available resources and allocate adequate funding to projects in major sectors that will leave a legacy,” he said, adding that all he will fulfil all his campaign promises.