Notice: Undefined offset: 2 in /home/absalogi/public_html/wp-content/plugins/visitors-online/visitors-online.php on line 438
 Hodo’s name will be in ballot despite supporting Eddy | Migori News

Hodo’s name will be in ballot despite supporting Eddy 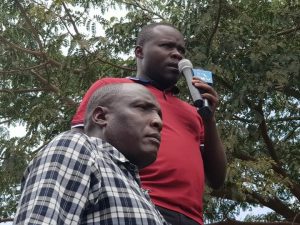 Solomon Hodo’s name as the People Democratic Party candidate will be on the ballot despite saying he has stepped down in favour of his rival Eddy Oketch.

Oketch, the Federal Party of Kenya candidate last week campaigned together after Hodo said he has stepped down in his favour.

Hodo said he took his decision after a serious soul searching.

Hodo’s move, as he is a Luhya from Kuria West, opened a leeway for Oketch for hunt for Kuria votes.

But according to IEBC officials who are preparing for the election slotted for next Monday, October 8, Hodo’s name will not be removed from the ballot papers which have already been printed.