Gwonyo: IEBC not fit to hold next polls 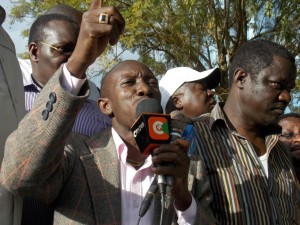 An aspiring member of parliament for Uriri Omondi Gwonyo has called on the disbandment of Independent Electoral and Boundaries Commission (IEBC) saying it is not fit to hold the next general election set for next year.

Speaking in Migori town, Gwonyo said IEBC is compromised and was independent to credibly run the 2017 general election.

The aspirant for Uriri constituency also said that IEBC and the Jubilee government had ganged up to frustrate the opposition.

“We cannot go to the elections with the current commissioners; the whole team has been compromised by Jubilee and must be overhauled,” the aspirant said.

He however urged the current IEBC commissioners led by chair Issac Hassan to honorably leave office so that desirable changes fronted by Orange Democratic Movement (ODM) can be realized.

“We as ODM have for a long time said that IEBC as currently constituted is not fit to hold any election and this has been confirmed through various by-elections and the peak was with the disbandment of Okoa Kenya,” Gwonyo posed.

Gwonyo questioned how Jubilee leaders got information concerning Okoa Kenya and even went ahead to speak about its imminent disbandment before IEBC could even issue official communication.

Gwonyo, a staunch ODM supporter it is prudent for another team to be appointed and thoroughly vetted adding that ODM would do everything within its powers to ensure a new team of supporters in installed into office.