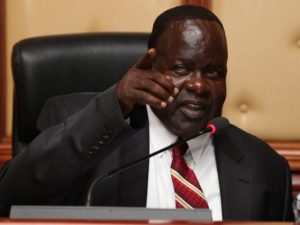 Two weeks ago two young men died as they were swept away by the flooded river when they tried to cross after a heavy down pour.

Residents also complained that their livestock have been swept away by the bridge during heavy down pour.

The new bridge which will be complete in two months will replace a foot bridge currently used by locals and is prone of being flooded.

“This vital bridge will key in connecting residents of Kokwanyo Kakello ward who need to access Oyugis town by giving them a shorter route,” Awiti said.

The governor made the first public appearance in the line of duty after the nullification of his victory.

He said the launch will be key in his second term in office which will embark on upgrading roads and bridges in the county.

Awiti used this platform to back NASA leader’s move to join hands with president Uhuru Kenyatta  for a peace deal.

“We are happy with the initiative by the governor to build us a bridge here. We know it will save lives ones its is complete,” Ochuna said.