Notice: Undefined offset: 2 in /home/migorine/public_html/wp-content/plugins/visitors-online/visitors-online.php on line 425
 Gold rush in Kehancha threatening the existence of the town | Migori News

Gold rush in Kehancha threatening the existence of the town 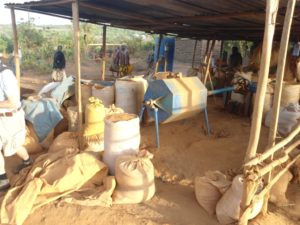 An upsurge in mining activities in Kuria West’s Kehancha town is threatening the peaceful co-existence among residents because of the manner in which the activity is being done.

This is as artisanal miners have resorted to mining anywhere they find without following due process and anyone passing through town will not fail to see the numerous mining pits.

This invasion miners to the town has seen residents raise fears over land grabbing  as they seek to prospect the precious metal.

The activity is also putting to pressure building activities around the town as there are several underground tunnels running beneath the town and explosives used to blast rocks in the tunnels.

Among affected lands is Kehancha Stadium which has turned into gold mines after miners pulled down its fence and boundary land marks.

Prospectors say that the land sits on gold deposits and its continued construction will hinder their mining.

“We appeal to the government to give us this land for mining. After all, the ground is riddled with tunnels underneath which can lead to the collapse of the stadium,” said Pius Mwita, a miner.

Mwita said they started digging holes around the stadium before moving horizontally underground to access gold under the stadium.

The land in question is adjacent to the Kuria West Sub County administration offices with fear that underground channels may lead to the area too.

This mining activity has also affected Kehancha Mixed Secondary school which is located within the town. 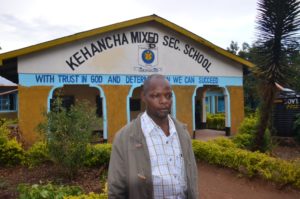 The school’s Principal Daniel Mirumbe said several buildings which include dormitories, toilets, classes and other school infrastructure have developed cracks on the walls and foundations.

“I am worried that many tunnels dug underground by the gold miners surrounding may sink may sink our structures any time,’’ he said.

He said the school which also grapples with lack of land was forced to call off a plan storey building in the school to serve as classrooms after engineers said the ground was not steady enough.

“We choose to build a storey building after attempts to buy nearby land failed completely because after gold and copper was found the community have refused to sell them off,” Mirumbe said.

He said institution has been forced to rely on water at river Tebese, a kilometer away after prospecting in nearby land rendered their 120 metres borehole useless after it dried up and was contaminated by mercury, a poisonous cancer causing chemical used to purify gold and copper. 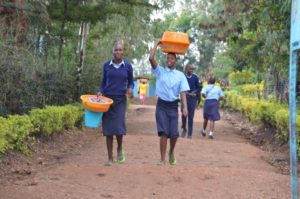 Most miners said they turned to gold mining after the collapse of tobacco farming.

“We had nowhere to turn to apart from gold mining. Tobacco is no more and we got the skills from other miners in Migori and Narok counties. It is lucrative,” Mathias Mwita, another miner said.

Raymond Odanga, an officer at ministry of mining and petroleum offices in Migori, said that the ministry is working closely with relevant authorities to address the land issue.

“We are aware of the problem and shall soon relocate the miners to a much better land. We urge residents to be patient,” said Odanga.

He said the most affected areas are Namba, Kehancha Chini and Tebesi estatesareas in the sub county where miners and land owners have clashed.

A gram of gold goes at Sh3,200 which is better price compared to tobacco farming before.