FULL SPEECH: These are the ghost workers from the just concluded staff audit 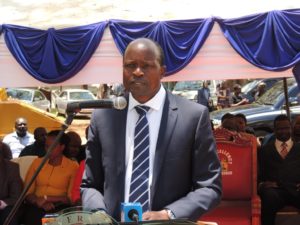 During the headcount exercise, we had a total 3345 employees in the payroll. Out of this, 3078 employees turned up. We are yet to understand where 267 persons were during such a vital exercise and the county government can only term them as ghost workers who must be dealt with conclusively. From the data analysed, 31 employees who showed up had questionable credentials/appointment letters while others were unknown to their supervisors.

We also noted a huge discrepancy in allowances drawn by employees among other irregularities, the county loses Ksh. 2,031,753 per month (on allowances).

Moving on, we noted that a number of former employees who had long resigned, dismissed and/or are convicts are still on the payroll and continue to enjoy salaries. I condemn such wastage of public resources in the strongest terms possible.

This exercise will save the county 7,545,643 per month with immediate effect.

Consequently, in consultation with the County Executive Committee, it has been hereby decided that;

The officer that has promoted himself and draws undeserved allowance must immediately step aside to pave way for investigations and disciplinary proceedings.

The following allowances; Acting, Special Housing, Risk, Extraneous, Health Workers, Uniform and overpaid House allowances on all flagged employees are suspended with effect from the conclusion of this press release. The employees in question are 859, we shall follow up on case by case to ensure it is implemented to the latter.

27 staff who continue to draw salaries yet they left employment of the county government are hereby permanently removed from the payroll. We shall issue a demand for recovery of such monies that have been drawn illegally from the county.

The employees who are sixty (60) years and above will be required to proceed on terminal leave with immediate effect. The Human Resource department shall calculate their benefits and deduct from such amounts salaries illegally drawn for the years they ought to have retired.

Those who had been promoted without the necessary academic credentials are hereby reinstated to their previous job group until justification is given as to why the employee was promoted.

Formal communication to the affected persons shall be extended and anyone so aggrieved but with good cause shall be allowed to appeal.

We remain committed to ensuring that Migori County remains an equal opportunity employer and that our staff offer the highest level of service delivery to the ordinary citizen within this great county.