Force will not win the war against FGM, anti FGM crusader says 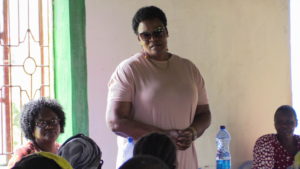 The war against female genital mutilation in the country is far from being won if the government of Kenya does not change tact, an anti FGM crusader has said.

Benter Adhiambo, the international coordinator for MINCONTRAP – Kenya has said the government’s way of employing force to fight the vice was proving futile.

Adhiambo said the government had made a big step by putting in place a law against FGM but forcing it on communities that practice often leads to resistance.

“The government should use a proper measure of implementing the law. It should not look like it is forced on the society,” Adhiambo said.

The MICONTRAP coordinator said that the was a knowledge gap among FGM practicing communities about the law in place and it’s consequences leading to the continued practice of the vice.

Speaking at Gibombwe SDA church in Ntimaru, Kuria East constituency where MICONTRAP was conducting sensitization on parents and their children against FGM, Adhiambo said most people living in the remote areas were not aware of the law and the few who were aware did not know the contents of the law.

She said communities need a lot of sensitization at the lowest level on the vice to help them end it.

“Communities should not feel threatened that the law is there and you are charged yet they were not educated on the law that implicates them,” she said.

She added,”If you know the law you will change but if you don’t know then you will not.”

The anti FGM crusader said MICONTRAP was involving the community in the war against the vice and this had brought a significant change to the Kuria community.

“FGM was part of a culture for these communities and for them to get out of it you have to engage the communities with people of their own,” Adhiambo said.

Through MICONTRAP’s initiatives, parents who attended the sensitization forum pointed out challenges that made some of them still hold onto FGM.

“You find that parents who had sons circumcised demanded that they only marry girls who had undergone the cut,” Ibrahim Mukwaya, a resident of Gibomwe village said.

But Mukwaya said through the intervention of organisations live MICONTRAP, parents who strongly held onto that notion had had a change of heart.

“Recently two girls who did not undergo FGM were married off in this church and this shows how serious we are the community are towards ending FGM,” Mukwaya said.

Another resident Kevin Mwita asked the government to help girls who did not undergo the cut further their education.

“Most of these girls come from very poor families and they need every support and care more so in the furthering of their education,” Mwita said.

However there are fears that cases of FGM will rise this year in Kuria as the community did not conduct it last year.

But according to MICONTRAP’s Kuria East field officer Colleta Bwai, the organisation was working hard to ensure this does not increase.