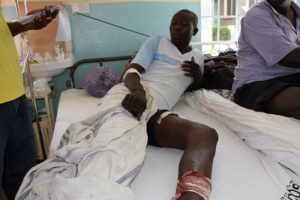 Five people were shot by Migori GK prisons wardens as they tried to pelt a lorry transporting inmates from Kehancha Law Courts to the prison on Monday.

Migori county police commander David Kirui told Migori News today that the five “tried to block the lorry and pelt it with stones. They were interfering with prisoners on transit.”

Kirui said during the demonstrations on Monday againsy IEBC commissioners police officers showed restrained if not for the incident.

Steve Ogutu Otieno, 23, was rushed to Migori Referral Hospital in a coma after he was shot twice on his left legs. Doctors successfully removed the bullets.

Otieno sat for his KCSE exams last year at Oruba Mixed Secondary School. He said he only realized he was shot after a colleague alerted him while outside a barber shop.

“I saw demonstrators trying to block and pelting the prison lorry with stones when officers started firing into the crowd. A bullet went through another man’s shoulder and hit me” Otieno said.

“When I refused to join them some of my colleagues turned on me and attacked me. They have threatened to torch my house again,” he said.

Suna West MP Joseph Ndiege and Nyatike MP Edick Anyanga said police should not excessive force on demonstrations and vowed they will not relent until IEBC commissioners pack and go home.