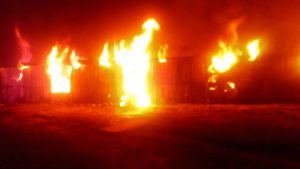 Itiero Secondary School in Kisii where seven dormitories were burnt down

Speaking at Itierio Secondary School in Kisii county, the CS said government will not offer any financial aid to any school engaging in student unrest.

“Parents should be responsible for the reconstruction of burnt school and government will not use public resources to reconstruct any burnt school,” he said.

He said he has already sent a circular to all county and sub-counties director of education to also stop any further transfer of students from schools experiencing unrest.

“Any student changing schools should first be accompanied by a clearance letter from the sub county directors of education,” he said.

He explained that the move is aimed at preventing unruly students from moving from one school to another destroying property and running away from liability.

The Principal Secretary Belio Kipsang’ said they will not subsidize crime and regretted that a sporting school like Itierio would cause such damage.

Itierio Boys High School’s seven dormitories out of the 13 were razed down by a fierce inferno on Saturday 25th, after students went on rampage demanding to be allowed to watch the ongoing Euro Cup tournament.