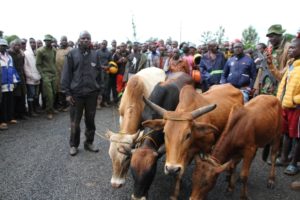 Onlookers gather around cattle recovered after a raid in Ragana, Suna West.

A man and his wife were killed in Ragana village in Suna West sub-county as cattle rustlers broke into their home Tuesday night.

According the area village elder and brother to the deceased Caleb Orwa Thabaka, the robbers broke into Kiche’s house and shot him dead.

“His wife was also badly injured and was left for dead but the thieves took nothing from the home,” Orwa said.

Orwa said the they two had left behind three children among them a two months old baby.

The rustlers then went to Jared Agwanda’s home where they stole four cows and escaped into Kuria.

Kuria West OCPD Benson Mukambi while speaking to the press said the wife later succumbed to the injuries while receiving treatment at Migori County Referral hospital.

Mukambi said police caught up with the thugs in Masaba, Kuria West where they shot dead one of the robbers during a fierce exchange of fire and recovered an AK 47 riffle.

“Members of the public who were trailing the thieves informed us of the movement of the thugs and this assisted us in laying the ambush,” Mukambi said.

Mukambi said the police also recovered the four animal that had been stolen before some of the assailants fled. 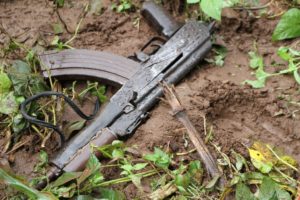 The Kuria West Police boss urged members of the public to continue collaborating with police to help in fighting crime in the area.

He said police had launched investigation into the killing.

Masaba Ward Member of County Assembly Abedi Maroa urged the police to step up security in the area.

Maroa said that cattle rustling needs to be stopped as it was threatening the existence between communities in the region.

“Cattle rustling is an outdated thing. We are against it and we are asking police to step up what they are doing,”Maroa said.

He added, “It is a responsibility of each one of us to maintain security and I want to urge the people of Masaba and all Kenyans to expose thieves and share information with police so that they can be out of us.”