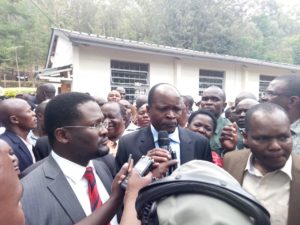 High Court judge Hillary Chemitei said that the petitioner former cabinet minister for energy George Ochilo Ayacko did not have substantive and water tight evidence that would have sought the annulment of the Governor’s victory.

The judge dismissed almost all the submissions by the petitioner and said that they lacked enough evidence that will have convinced the court to annul the Governor’s victory in the August 2017 polls.

Migori Governor Okoth Obado celebrated the verdict of the petition with his supporters as the court premises were sealed off by armed police officers inside and outside the gate.

The Court directed the petitioner Ochilo Ayacko to bear the cost of kshs. 6 million that will be paid to the Independent Electoral and boundaries Commission and Migori Governor Okoth Obado.

The Migori High court was packed full with supporters of the two opposing sides as they sat and listened keenly to the judges’ verdict that upheld the election as celebrations rent the air.

During the August 8th General elections Governor Okoth Obado won the elections by garnering 201,369 votes against the petitioner Ochilo Ayacko who got 113,773 votes.

Addressing the media after the verdict, the petitioner George Ochilo Ayacko said that he is going to appeal the court decision and also consult his legal team on the other way forward.

He further said that he has no reverse gear on matters of justice and he has seen several gaps in the court verdict that he is going to analyze with his legal team before he announces his next course of actions to get justice.

Migori Governor Okoth Obado could not talk to the press as he was whisked away into his official vehicle by his security teams but later addressed his supporters far in town and said that the campaign and elections season is now over.

He asked the residents to keep calm and maintain peace since it’s time to focus on the development agenda for the people of Migori County.