Notice: Undefined offset: 2 in /home/absalogi/public_html/wp-content/plugins/visitors-online/visitors-online.php on line 438
 Anyanga calls for compensation for those attacked by wild animals | Migori News

Anyanga calls for compensation for those attacked by wild animals 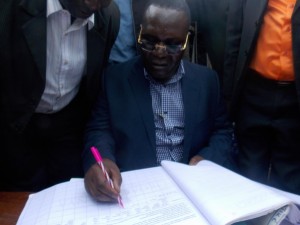 Anyanga said he will follow up with Kenya Wildlife Services to ensure affected people are compensated,

He was speaking at Muhuru Bay recently as he reacted to an accident where a fisherman drowned while his colleague survived after they were attacked by hippopotamus in Muhuru Bay.

The two that were on their normal fishing activity were attacked by the hippopotamus that wrecked the boat they were in and they fallen in the water, unfortunately one drowned but the other survived.

Nyatike OCPD Dishon Chebaka said the body of the deceased, Kennedy Omondi has been recovered and it’s preserved at St. Camilus hospital mortuary.

Locals have appealed to KWS to move with speed and to save them from these animals.