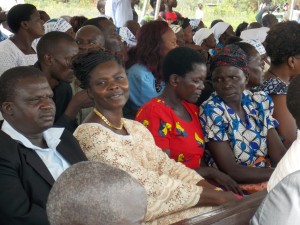 Migori governor aspirant Anne Anyanga has taken it all by hitting hard at incumbent Governor Zachary Obado over ‘land grabbing’ allegations of the Catholic Church.

Anyanga was speaking on Sunday at St. Celestino Oruba Catholic church said the stand-off has marred the image of Migori and called upon electorates not to vote for leaders who are persecuting the church of God.

“It is so painful when leaders at the helm who ought to have helped churches in fighting land grabbing cases are the ones mistreating the ‘flock of God’,” she said.

The aspirant said that she will repossess the alleged grabbed land that belongs to the Catholic Church if elected to form the next county government.

“The current county leadership has tainted itself with the land image, we will move to reposes the land if elected,” she said.

She called county residents to shun politicians who are peddling rumors over her political future telling her to relinquish her gubernatorial quest in favor of others.

“I am urging you to give it a deaf ear on propaganda my competitors have staged against me that I will not deliver to you if elected as the Governor,”she said.

She donated Sh80,000 to the church choir that will enable them record and produce their songs and put them on the digital platform before the next general elections.