6 FULL LIST: Jobando, Eddy sneak in to upset Ayacko as Makasembo chased away by IEBC 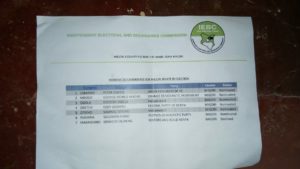 The IEBC has completed the clearance of candidates who will run for the Migori Senate seat in the coming by-election.

Those who were cleared are:

POJ, as he is commonly called by his friends pulled a fast one on Migori county residents as no one expected him to be in the race. In 2017, POJ campaigned for Ochillo Ayacko for the governor position, putting his brand new Range Rover on the road. After losing he broke ranks with Ayacko and his main man Suna East MP Junet Mohammed. He is from Suna East constituency and is closer to Governor Okoth Obado moving forward.

The last time he was on elective politics as a candidate he lost to Junet at ODM primaries in 2013.

Seen as a front runner after his main political nemesis Dalmas Otieno stepped aside to take up a Salaries and Remuneration Commission post he had declined earlier. Ayacko vied for governor position in 2017 and has the backing of the ODM party and Raila Odinga. He is the front runner, but supporters of Obado are still plotting on him after Dalmas pulled out at last minute, a day before being cleared.

A businessman from Suna East, has vied for the seat twice and coming down the pecking order in both time. He is independent as he stands despite coming from Suna East, the same region as Hellen Obado’s home area he is yet to benefit from his in-law county offings like some of his Kadika clan members.

He is known for carrying out abrasive campaigns and speak his mind openly.

On Wednesday Eddy, who came second in last polls was in Orange House with Raila Odinga insisting he has pulled out in favour of Ayacko. Then boom, on Thursday he sneaked in, got cleared and went off to Nairobi. When Migori News broke the news, he got a backlash from readers. But he is not a pushover, the youngest aspirant was the only politician in 2017 in Migori county to campaign using a chopper. He hails from the same Kanyamkago clan like the governor.

He got about 50,000 votes in 2017 after he ran as independent ticket. The educationist is the strongest and sure bet in the list to be able to beat Ayacko. One, the educationist is a Luhya residing in kuria and during his clearance the two formed bulk of his team. He has been endorsed by Luhya community (About 50,000 votes) and has an upper hand for 86,000 Kuria votes out of 380,000 in Migori.

Little known, we only know he hails from Rongo constituency.

Kennedy Makasembo failed to clear as he failed to meet the threshold on a Restore and Built Kenya ticket as he arrived at iFAD hall late. He came earlier and was told to come back with several documents by 4pm as require by law. He walked in at 4:30pm.

Makasembo, a teacher by profession and former Kuppet county official has been active on social media where he heavily blogged for governor Okoth Obado in 2017 and took time to attack Ayacko for the governor post.

When Obado named his cabinet he loudly missed out despite the bulk he did on social media.