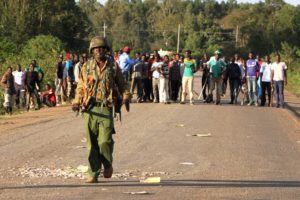 At least five people have been injured and more than a hundred displaced after clashes along the Luo and Kuria communities in Migori county.

This followed fresh ethnic clash among the two communities at Karamu area in Kuria West and Suna West borders during visit by Deputy President William Ruto.

The tension began on Monday evening before Ruto visited the area on Tuesday with retaliatory attacks, worsening the relations and business operations between the two communities.

It forced police officers to patrol the area with attempt by a section of Migori county assembly leaders to restore tranquility failing.

Speaker Boaz Okoth, Masaba MCA Abedi Maroa and his Oruba-Ragana counterpart talked with youths from both communities and called for peace.

The two communities have been at logger heads since the last general elections over a flopped negotiated democracy pact.

The stand-off is believed to be politically instigated as members of the Luo community believe that their counterparts from the Kuria community betrayed them.