4.1billion Nyatike irrigation is on 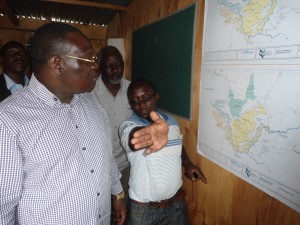 Work is still on-going at the 4.1 billion shillings project, expected to transform the semi-arid areas of Nyatike in Migori County into a rich agricultural area and ease the food crisis frequently experienced in the region.

The project, to be implemented by the National Irrigation Board Project and fully funded by the Kenyan government and which will see phase one ,which will cost Sh 700 million kick off in March 2012 and is expected to be completed before the end of the year.

Speaking during the launch of the program in Nyatike, National Irrigation Board Eng. Felix Shiundu said some 7,717 ha will be covered by the project  put under the project in Nyatike and Karungu Divisions.

“The residents will be able to grow paddy, vegetables and various industrial crops such as rice, soya beans, cotton and sugar cane” he said adding that this was expected to greatly   boost the economy of the area which for decades has remained underutilized.

At the same time, Eng. Shiundu explained that the final design of the project had already been completed and what was remaining was educating the local residents on land ownership to allow the contractor to move in and start the work.

He said the program had already identified 2,088 farmers whose land will be acquired for the laying out of the canals adding that money to compensate farmers had already been set aside to the tune of Sh 87,397,389, and asked local politicians to refrain from dragging politics into the project.

He praised the initiative saying it would be beneficial both to the region and the country at large as it will assist in alleviating poverty among Kenyans, added Eng. Shiundu who was accompanied by other senior officials of the board and GIBB International.

Speaking at the same occasion, Mrs. Nyawira Githinji , an officer from the board praised the project saying it will also go along way in helping the area reduce health risks due to frequent use of contaminated water at it will offer clean domestic water for both the locals and their livestock.

The project, Mrs. Githinji said will come handy in managing the consonant flood problem in the region saying the construction of dykes along the two river banks are expected to hold excess water that sweep farms and homes in lower Nyatike causing deaths to both human and livestock, said Mrs. Githinji.

Meanwhile, a total of 14 million shillings has been paid over to some 200 land owners from Nyatike District of Migori County as compensation for the land they gave out for the establishment of the multi-billion lower Kuja irrigation scheme in the area.

Speaking yesterday, Nyatike District irrigation officer Mr. George Koyoson said this was per the agreement which was made between the locals and the government when the program was launched last year.

“We are committed to meet our side of the bargain to ensure that the program goes on well” he said adding that all those whose lands were taken by the project will be compensated.

He also admitted that another group of 1,888 residents were yet to get their compensation, totaling to over Sh 73 million but assured them that all was being done to see that they are compensated.

Last year, those yet to get their compensation asked the government to move fast and do so saying the 4.1 billion shillings project should not go on while others are still waiting for their money.

According to the officials involved in the project, the Government had set a side Sh 87,397,389, to pay 2,088 land owners in the region as compensation for their plots.

However, Mr. Koyoson urged them to be patient saying everybody will be compensated in time adding that the project will greatly improve the lives of the locals and should be supported.

He explained that the project will also help in managing the raging floods that have been causing havoc every year in the region as dykes will be constructed along the banks of rivers Migori and Kuja to tame excess water that always wash away farms and homes in the region.

However, the project has not been without challenges of its own. Late last year,  some of the employees threatened to down their tools following what they said were poor payments.

Speaking when he visited the project site, area MP Edick Anyanga said the high number of complaints against some of the senior officers at the project meant that they could not be ignored anymore.

“We can not turn a blind eye as these things happen to workers here,” Anyanga said adding that as much as the people there wanted the project to succeed, the implementers  have to abide by the set down laws.

He asked the two companies undertaking the contract to ensure that the workers were paid well to motivate them to work even harder.

He was speaking during a visit at Orango intake area along River Kuja to see how the 700 million first phase of the project, which was initiated  by former Water Minister Charity Ngilu in 2012 was going on.

“We want the workers to paid well to avoid unrest which will delay the project which will go on for six other phases,” he said.

Anyanga said that the NIB as the client should work closely with the contractors to ensure the project is on schedule by avoiding workers unrest.

On his part, David Mwailu the site engineer said the money they are paying is competitive in the labour market adding that the unrest over salaries was caused when payment delayed in the past months for 2-7 days, which he said was normal.

9 thoughts on “4.1billion Nyatike irrigation is on”