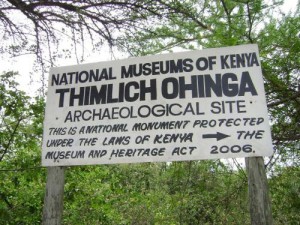 “While the Portuguese had their fort Jesus, the Luo’s had their ‘Thim Lich Ohinga’” Silas Nyagweth, the curator at site tells me moments after I had made my way into the giant self-imposing stone structures, built in the 15th century but still with the ability to send our best architectures scratching their heads for explanations on how it was made.

Thim Lich Ohinga, a Luo word loosely translated into a frightening dense forest and a fort, has for sometimes now elicited just as much interest as curiosity from adventurers, archeologists, and
architectures alike.

Made up of stone walls ranging from a meter to about four and a half meters, this structures not only epitomes the art of architecture in the olden days, but also has got a near perfect combination of the cat: beauty, strength and balance.

Situated about an hour’s journey by road from Migori town, deep into the west of the country towards the shores of Lake Victoria at Sori, this historical site has almost striking resemblance to the ruins of the great Zimbabwe in southern Africa.

Thim lich has always been a source of different researches, none yet to come up with the exact explanation of how the ancient man, always rebuffed for his perceived ‘backwardness; could have come up with a near perfect art.

I take sometimes before getting inside, marveling at the art used to join the rocks to form the protective but intimidating wall surrounding the scene. Silas meanwhile makes his way inside using the entrance, not more than a meter tall.

Eventually I get inside, albeit after having to bend close to kneeling on the ground. Inside, I find Silas who has since taken up a strategic position just on top of the entrance. He informs me that the place was the watchtower for the guards.

‘The doors were made short intentionally’ he says. I soon get to learn the reason why the doors were made to be that short was to ensure that by the time the enemy got inside, he was less stable as he was still bending. The guards could then easily overpower him.

The security in this place is simply intimidating.
‘The Luo’s were not really cowards, they simply were not taking chances’ He explains as if reading my mind as I marvel at the almost water tight fencing round the home. I want to tell him that I think whatever I am seeing is more than simply not taking chances but I change my mind.

From the conviction on his face, winning that argument appeared a long shot from me. The main enclosure or ‘Ohinga’ I find myself in is about one hundred and forty meters in diameter, quite a large home. Silas explain that the stones have been interlocked in such a way that they can never collapse.

He moves towards where the cattle pen is believed to have been. The pen, also made using stones is also still intact to the last stone though it’s not as tall as the other fort.

I do not take much time at the pen, so we move to the games section.

‘The women, on top of grinding the grains, also had the role of supporting their men during the games’ Silas explains when I ask about the arrangement of the grinding stones. Curiously, we do not come across any game the women used to play in the fort.

A couple of monkeys make their way past where we are standing barely noticing us though they scamper away the moment I take my camera out.

From the games section, we make our way or rather Silas makes his way while I follow him to the middle of the home.
‘This is the picnic section’ He explains and laughs when he sees the surprise on my face. Picnic. It seems almost incredulous that the man who lived in the fifteenth century could even think of picnicking but here we are at the picnic grounds.

‘They did mostly games, they wrestled, or just had parties’ he explains although he can still see traces of doubts on my face.

Away from the picnic we move over to the industrial site. Here, unused ores are sill lying though they have since been affected by the rusting. Silas explains that rusting was the main economical activities of the residents of the fort.

Among the instruments they made, I later learn were jembes, pangas, arose among other metallic instruments.
World’s most endangered Site. I take my time again and try to take everything in Thim lich at a
glance. It is unbelievable that this place, that’s so enchanting to any visitor, was back in the year 2002 listed as number forty eight among the most endangered sites in the world.

‘It has been on the listing for the most endangered species since nineteen ninety seven’ Silas explains when I ask why the place was considered as endangered. He then goes at length to explain that that the place had been ignored for a long time before it was taken over by the national museums of Kenya.

Before making the journey, I had decided to have a number of reference materials on the scene, in the process coming across Neville Chittick’s book. But being inside the fort itself is a totally new experience that neither the book nor explanations from those who had been there could really give.

As we move out of the fort through one of the two exits available, which are even smaller than the entrance, I notice the funny writings on each exit. I remember having seen one on the entrance and I ask what they meant.

‘That’s still, a subject of debate and research’ Silas explains though he admits that the writings seem to be following a trend though he is not sure what they really means.

Nature trail
As we leave the fort and into the nature trail surrounding the fort. An antelope passes strangely in a company of a number of monkeys some meters from where we are.

Soon, we are deep into the forest. This, I am told is where the residents of the fort would run and come into whenever they had been overpowered in a fight inside the fort, something that never got to happen during their stay there.

It takes us about ten minutes to finish the journey through the dense forest surrounding the fort. By the time we are through, I have come across more antelopes, monkeys, and even a number of guinea fowls. The journey is also punctuated with endless shrills of the birds throughout the trip.

He, unavoidably take me through the history of the forest. Before, it used to be full if wild animals, but again the people who lived here were hunters so a number also died in their hands.

Soon, the road leads us to another fort, identical to the one we had just toured. I can see a third one and even a fourth one.

‘There are actually four forts in here’ he offers in a matter of fact ways. He explains that the four homes, known as Kochieng, kakuku, Kokech and Koluoch combine to make the Thim Lich Ohinga.

I barely have enough time to see all of them but I decide to at least tour Kakuku fort. The home has since been taken over by a number of trees which have grown all over it. But this has not taken anything from it.

On the contrary, it has made it even more beautiful. From the beautiful canopy being formed by the trees, verdant fertile land, which was the reasons people, settled into the forts in the first place, coupled with the stunning mountainous scenery of Macalder gold mines, one of the oldest gold mines in the region glittering above the home, the home is simply breathtaking.

Next to the homes stands a smaller one which, as Silas explains, belonged to one of the settlers who was allowed to put up a home within the fort due to the forts’ perceived security. So the locals were not mean people, he hasten to add.

Fish bones discovered in the fort in 2007
We soon come across a newly dug hole just at the center of the home. ‘This was due to an excavation process’ He informs me. I get to learn that there are still a number of researches being carried out to determine what really used to happen in this place.

He then goes deep into the newly dug hole and inform me that a number of things were recovered during the process which took place in 2007.

Among them were fish bones (I am not surprised) and three stones which were arranged in a way suggesting that they were used for cooking.

We move back to the center of the fort and I get a little insight into the history of the place. Even though the Luo’s were the people who lives in this area, the existing evidence are pointing towards the Bantu’s being the first settler at Thim Lich.

Silas explains to me that the Luo’s came in the avenue around three hundred years ago, which is about two hundred years since the first lot had settled. So it was the Bantu community who laid the foundation of the fort.

Soon we are in the clearing, just at the entrance of the fort. Here three grass thatched houses stands. Silas explains to me that one of the houses has been made to show how the houses in the fort used to be.

I get inside to have a look. Apart from the fact that the ventilation is quite poor, the house is rather fine. This, I learn is the typical Luo house. Having the sitting room at the center of the house, surrounded by different rooms such as kitchen, adults bedroom, children’s bedroom and a store.

The other houses are actually inhabited by the fort’s employees, Silas also staying in one of them.

Un African to say no to food
It is almost time to leave but Silas asks me to accompany them for lunch, which as I would have expected, has got fish as one of the major ingredients.

It is un African to say no to food, for that is like suspecting your hosts of not being well meaning, he explains when I try to tear myself away, and in anyway, didn’t I come all the ways to have a sample of how people used to live here?

We soon settle down for the lunch before eventually leaving the Nyanza’s fort Jesus.