Notice: Undefined offset: 2 in /home/absalogi/migorinews.co.ke/wp-content/plugins/visitors-online/visitors-online.php on line 438
 OPINION: My first encounter with Condoms, how time has changed | Migori News

OPINION: My first encounter with Condoms, how time has changed 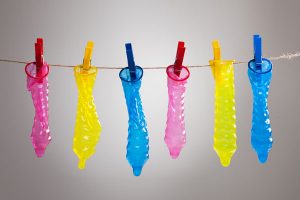 I can remember my first encounter with the word ‘condom’. I must have been 10 or 11 and not having come across the word before.

I did the next most natural thing. I asked my teacher.

She responded like I had uttered an obscene word and gave me a slap for my curiosity.

The incident took place before ‘condom’ became a daily feature of our media; before a stroll down our streets at night saw sweet vendors displaying packets of ‘Trust’ next to the orbits and ball gums.

Today, there’s a wide selection of condoms in the market that shopping for one requires the assistance of a guidebook- or someone with prior knowledge.

And now the female condom has joined the fray. God knows what they’ll introduce next- may be a reversible condom that both sexes can use at a go!

Now even the UN Sec. General utters this word in public, religion leaders are giving sermons about it in holy sanctuaries.

Yet the word ‘condom’ still sparks a vivid blush and an embarrassed attitude from most people when brought up.

It’s not like other form of contraception. The pill is considerate enough to let us swallow it (a woman can take one in public and pass it off as a vitamin pill). IUDs are hidden in dark recesses that no-one ever sees, not even the user.

I once participated in the making of an advert that shows the struggle most condom-shoppers go through. The young man walks into a shop and on finding his uncle there, he asks for a packet of biscuits instead.

His uncle does not leave the shop. So the young man asks for another packet of biscuits. And another. 5 packets later, the young man is inspired by the actions of another man who walks in and asks for some condoms without ceremony.

This is a familiar scenario for most condom shoppers.

For some reasons that I don’t understand, the condom rack in supermarkets always seem to be situated in the aisle right next to the cashier’s till- where everyone in the queue can take note of your dilemma as you debate on whether to pick the ribbed ones or the flavored ones, and speculate about what you will be doing later that evening.

I think some kind of code language should be introduced to help the prospective condom buyers. May be a signal of the eyebrow, or a twitch of the thumb, and the cashier can deftly slip a pack into your shopping leaving the other shoppers none the wiser.

Then there is the matter of when to bring it up with your date. Does it come right after your introductory meeting: “Hi! My name is Philip Miyawa and I always use condom!”

Or right after the first date: “Just so that we know where we stand”

Or when you finally find yourselves in that situation: “You mean you want me to go out and buy some now?!!”

Bringing it up while you’re still in the ‘my hobbies are’ stage would certainly preempt the whole process of intimacy and seduction. To wait until ‘that time’ might be too late. Oh what to do?!

It is my hope that some day, it might get easier for people to refer to condoms without that hypocritical flush warming their cheeks.

One thought on “OPINION: My first encounter with Condoms, how time has changed”