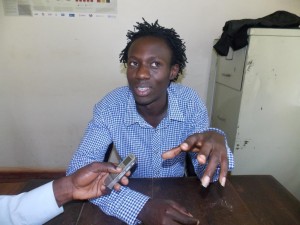 By Emily Otieno and Chrispine Richards

Migori based local artist Stephen Otieno alias Triple S is the talk of the town following his resent video release which is likely to thrill local and even international fans and generally in Kenyan Showbiz.

Kenyan artist mostly find it cumbersome to penetrate and be stable in the industry following different obstacles they face as well as financial hiccups to record with different recording labels addressing journalists in Migori, Tripple S aired his plight as an upcoming artist.

‘’Generally we artist we depend on our own money and rarely do we make it in the music industry. ‘’He lamented.

Triple S realized his music passion way back in Primary school, where he started as a dancer and participated in public promotion as well as talent shows.

‘’Actually I believe my recently released video is yet to put me in the limelight as the overwhelming downloads from the YouTube continue to rise as days go.’’

Migori county is rich with talents and simply lacks the platform where to showcase their and has derailed the upcoming artists from the region.

Triple S is yet to launch n album and appealing to the county government to help him grow in the industry.