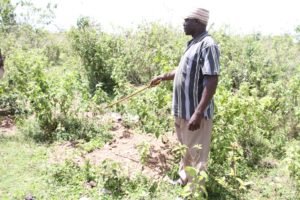 Residents of Lichota village in Migori County yesterday protested the state of graves at a government owned cemetery in the area.

They said they are disturbed by shallow graves where people unknown to them have been burying bodies.

A section of residents herding their animals in the vast land between Migori ASK show ground and Lichota airstrip said the shallow digging of graves had left the area littered with bodies.

Speaking to the press, Tobais Orinda said they live in fear as dogs were spotted with body parts in the village.

WATCH THE VIDEO HERE: Dogs exhume bodies at Lichota cemetery in the outskirts of Migori town

“We are very afraid as we often bump into bodies exhumed by dogs from the shallow graves as we graze our animals through this land,” Orinda said.

Orinda narrated of a shocking incident where his dog once came home with a human bone which sent him into panic as he thought it had attacked and killed someone.

“There are other instances where we find our dogs satisfied without us feeding them but they eat from this place,” Orinda explained.

When MN visited the area, we were met with a scary scene of a dead body part from a recently buried body wrapped in a blanket showing from one shallow grave. 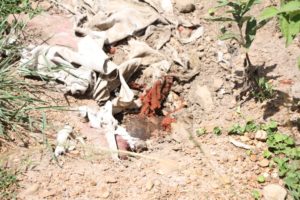 A body mauled by dogs at Lichota cemetery

According to Samuel Magunga, the body was part of five other bodies that were recently buried in the grave and had been dug out by dogs.

Magunga said said the situation has been going on for long and urged the County Government to intervene to avert mental disturbance the villagers are going through.

“We condemn in the strongest words the disrespectful way in which these people are buried and we demand that its stops forthwith,” he said.

But County CEC for health Kepha Nyamita said he was not aware of the burial taking place at the place.

“The said cemetery at Lichota has not been gazzeted and those burying bodies there are doing so illegally.