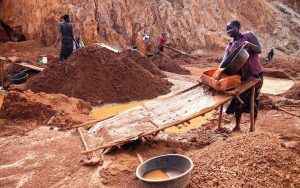 Gold miners at the Macalder mines in Nyatike in Migori County, where cases of children working in violation of the labour laws is the order of the day. [Photo: Malachi Motano)

“I would rather work for people here at the mine, who will at the end of the day give me money to buy food for my family,” says Charles Otieno 12.

“. . . even my parents say what I am doing is right because I buy food and clothes for the family and my siblings,” says 14-year-old Jack Ongiri.

These two boys are no different from Scholastic Auma. The 12-year-old walks over 10 kilometres daily to a copper ore and gold site in Nyatike, in Migori County.

“Working in the mine is repetitive, dirty and desperate. If there is no gold, there is no money. I stopped going to school because I could not afford to buy a new uniform and chances for me returning are slim,” says Schola.

Behind Schola, as she prefers to be called, are other children hauling loads of rocks bigger than them and pounding boulders into road gravel for hours on end.

Thirteen-year-old Brian who was at the mine together with his parents says they do not earn much because: “After a middleman takes a 20 per cent commission for carrying the load, we are left with around KSh800 ($8). This means the three of us earn about KSh260 for the backbreaking work,” says Brian.

“When people are poor, anything that brings in income no matter the danger is acceptable. This site is just one of dozens in the area. This one has not had any fatalities, thank God. But this has not been the case elsewhere,” says Peter Ogindo, Children Officer in Suna, East Migori County.

The officer says it is not uncommon for children to fall down in the open mine shafts or get injured in a tunnel.

According to Ogindo, exhaustion, pneumonia and tuberculosis are common.

Labour laws of Kenya are very clear and it is an offence to employ anyone below the age of majority, 18 years. However, this rule is being flouted in the rural and in some parts of urban areas.

The Children’s Act 2001 is explicit about the ban, but the problem lies with enforcement. There are some officials who collude with parents to exploit the children in the name of survival.

Ogindo says school dropout rates in Migori county is one of the highest in the country. The problem skyrockets when gold is found in a local community and parents flood into mine sites with their children to negotiate with the owner to let them work jointly.

“Efforts by the Government to persuade parents to keep their children in school have been in vain,” says Jack Omoro, a government official in one of the mining areas, says: “One thing that has held us back is that while we promote education, there is little to end the vicious cycle of poverty that creates this problem in the first place.”

Says Omoro: “A parent will find it hard to send their son to school when that boy can bring back income that very evening when employed at the mine.”

According to Mining.com, Kenya is rich in resources. There are more than 300 firms exploring the country and producing its resources after positive findings for deposits of gold, copper, titanium and zinc. The ministry of Mining says the profits will total $670-million annually, but most of this money will leave the country with the Western companies.

“A consequence of the commercial boom is a rise in artisanal mining, where locals move into the abandoned mine sites after the Western companies leave,” says Dan Kazungu, Cabinet secretary Ministry of Mining.

A new Mining Bill, if passed, will benefit communities living in mineral-rich counties.

These communities will soon start benefiting from the proceeds of minerals mined in areas where national government will take 70 percent of the resources while counties and communities will share 20 and 10 percent, respectively.

According to local charities that work in the areas like Migori County, the increase in mining activities exacerbates child dropout rates and illness in the area.

A world Vision official says, mining work is harmful to children, and can permanently damage their growing bones and muscles. The minerals they are working with are often hazardous. Exposure to uranium and mercury are not uncommon, especially at the Kenyan gold and copper mining sites, and exposure can cause serious health effects.

Tuberculosis rates in the Migori region are worrying at 37 per cent and local health officials say they see a rise in respiratory infections in miners working in the dusty conditions.

“The reality is that these families are dependent on the little income they can get out of these places as a source of income,” says Cheryl Hotchkiss of World Vision.

Under its new No Child for Sale campaign, World Vision is hoping to eliminate the worst forms of child labour by putting pressure on governments and big businesses to take a stand against unethical business practices.