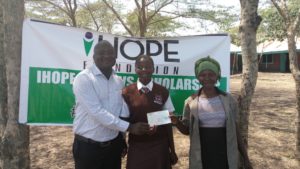 Mr. David Maganya when he issued a cheque to Yvonne Achieng’ Nyambok and her mother Dorothy Akello Nyambok at St. Joseph’s Alendu Primary school in Nyatike on Saturday

A form two girl whose parent could not afford to keep her in school has been rescued from dropping out of school.

Yvonne Achieng’ Nyambok of Ogande Girls High school was contemplating ending her schooling after a rough start in form one.

Achieng’s education until form four will be sponsored to a tune of US $2000 by I-Hope foundation, which operates in Migori and Homa-Bay counties.

Despite the 15 year old girl from Alendu sub-location in Nyatike sub-county sitting her Kenya Certificate of Primary Education (KCPE) in 2014, she had to wait till 2016 to join Form One at Ogande.

Her woes began in 2013 when her father disappeared from their home, never to be seen or heard to date.

According to her mother Dorothy Akeyo Nyambok, she was left to fend for her three children, Achieng’ being the second born, from a meager income she gets from selling vegetable.

“In 2015, when this girl (Achieng’) passed her KCPE, her elder sister Brenda Awuor had also done exemplarily in her Form four and was to join college and I could not pay fee for both of them,” Akeyo said.

With the father to her children having deserted them, and having no steady source of income, she tried accessing National Government Constituency Development Funds (NG-CDF), County government scholarship and the Ward Development funds to no avail.

This was despite her scoring 369 marks in KCPE and being the best pupil in her zone in 2014. 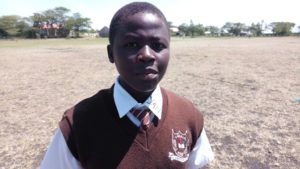 Yvonne Achieng’ Nyambok who was saved on the verge of dropping out of school by I Hope foundation.

It was until the mother of three sought help from her daughter’s Primary School head teacher Mr. Tom Mwo that she managed to secure a place for Achieng’ at Ogande girls a year after she sat for her KCPE.

“She was always crying wanting to go to school but I had no means of supporting two children in school at the same time,” Akeyo narrated.

Alendu and Nyatike at large being semi-arid, Akeyo could not get enough vegetable to sell to educate and feed all her children.

Speaking at St. Joseph’s Alendu Primary School on Saturday, Area Assistant Chief Peter Jowi Ochanda said many people in the area live below the poverty line making it difficult for them to feed and educate their children.

“We have bright children but they are wasted because it reaches a point where they can’t do anything because of resources,” Jowi said.

He said there are many cases like Achieng’ who had performed exemplarily that needed to be helped from wasting their brains in the villages.

The Assistant Chief urged more well-wishers and organisations to come to the rescue of more children, especially girls to help uplift Nyatike from its current poor state.

Felix Okinyi Wambogo who was the first beneficiary of the scholarship as a student at Kenya Medical Training College in Homa-Bay urged students to exercise high levels of discipline to better place them for the programme apart from good performance.

David Maganya, a director with I-Hope foundation urged parents to invest in their children’s education for the betterment of their lives and the region that lags behind in development.

“After successful completion of their studies, your children will be better placed to take care of you as you will be aged and not able to do much yourselves,” Maganya said.

Maganya said I-Hope foundation is partnering with a sponsor from Canada under the I-Hope Fellows Scholarship programme and had sponsored 10 students through high school and college since its inception in 2013.

He said he was inspired to help others get the chance to go to school as his University education was also sponsored by someone else.

“Were it not for someone else who rescued me while I was a student at Moi University, I would not have been here to help this lady achieve her dream today,” Maganya said.

Maganya also urged professionals, well-wishers, organisations and other partners from the area and beyond to save the child of Nyatike whose education is threatened by the high levels of poverty.

Apart from the scholarship programme, I-Hope also runs a Water, Sanitation and Health (WASH) initiative and runs a menstrual hygiene management programme where girls, mostly in high school, are given sanitary towels and trained in their handling and disposal.

The foundation also advocates for safe working environments for Artisanal Gold Miners in parts of Nyatike as well as run a tele-medicine programme at Sori Lake side Maternity and Hospital with support from Addis clinic in Boston.