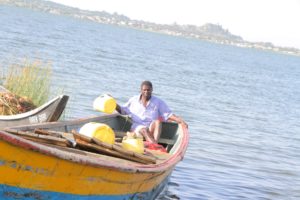 Fisherman at Bam Got Beach in Muhuru Bay

Kenya is ranked the fourth major producer of aquaculture in Africa. However fresh water Aquaculture (refers to the breeding, rearing, and harvesting of plants and animals in all types of water environments) has in the recent past registered depressed performance despite its potential capacity of 11 million tons per year.

The reduction of total fresh water output dropping by 19.8 percent from 18.7 tons in the year 2015 to 14.9 tons in 2016 has been attributed to many factors including wrong farming methods, dwindling and pollution of fresh water resources through human activity.

It is for this reason, farmers of aquaculture in Nyanza and Western regions have been urged to consult with professionals on especially fish farming which is picking in the region, to ensure sustainable ventures.

Kenya Marine and Fisheries Research Institute experts based at Kegati Aquaculture Research Centre in Kisii County urged individuals and institutions of learning that engage in the farming to go the technology way in a bid to counter the myriad of challenges facing the sector. 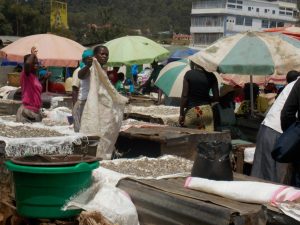 Speaking at the facility which is in the outskirts of Kisii town, research scientist in fish genetics and culture systems Dr. Paul Orina said innovative technology was the only way of ensuring effective production as rivers dwindle and lakes become polluted by humans.

Dr. Orina underscored the need for learning institutions to train aquaculture engineering so that farmers can move from the traditional reliance on rivers and lakes, to other potential ways to produce the critical volumes of fish required to fill the growing gap in the national supply as wild fish catches continue to decline.

According to Dr. Orina, utilization of smaller portions of land including backyards in urban centers, use of timber and available local materials could make fish farming easier and more cost effective.

He noted the need to involve experts from the initial stages of site selection because land size, temperatures and soil types differ hence requiring different kinds of ponds.

He cited various kinds of ponds widely used in Kenya and which have proven reliable as earthen and linier which are mostly reliable in sandy soils to reduce water seepage, tanks, and cages which utilize small pace, recirculation systems and integrated systems.

Noting that earthen ponds are the most popular, The specialist said common pond size is 300 meters squared with depth varying from 45cm to 110 cm in order to maximize light penetration for natural food production.

He urged those investing in the farming, to seek training in developing business plan to ensure viable venture and to avoid abandoning their businesses along the way.

He urged the farmers to collect the correct seed from the center where Nile Tilapia (oreochromis niloticus), African catfish (Clarias gariepinus) and Goldfish (carassius auratus), are available at reasonable cost.

He cautioned the farmers to beware of unscrupulous businessmen who give wrong advice and fake seeds leading to massive losses.

Dr. Munguti said feeds were the most costly component of fish production taking 50percent of the total cost and advised those doing commercial production to deal with commercial feed producers who offer solution in the matter.

In culture system, he advised farmers in Gusii region to venture into greenhouse farming to increase temperatures which is very important in the production.
Evans Okemwa, a farmer who deals in aquaculture in Nyamira County said the venture was viable if one followed the right procedures as given by the research institution. 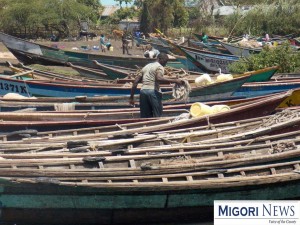 A fisherman inspects his boats at disputed Migingo Islnd

Okemwa said he started with two ponds in January last  year with 1,000 fingerlings and is now doing mass production for local population and outside, in seven ponds with a population of 10,000 fish.

He lauded the KMFRI aquaculture experts for continued support with useful information and viable seed which has enabled sustainability of his business.
Okemwa called upon fish farmers to exercise patience and be passionate saying it was only a few months after initiating the business before one can smile all the way to the Bank.

Others present were research Scientists Elijah Kembenya, and Cecilia Muthoni among others.